Boom Chicago is one of the participating experiences in the Amsterdam Nightlife Ticket.

An Amsterdam Nightlife Ticket includes 1, 2 or 7 days access to Nightclubs, Experiences, and extras for €10.

“Spontaneous Performances and a Cozy Atmosphere”

The famous comedy shows held at Boom Chicago has been going strong for the last 25 years. It is a great way to start your night out with many laughs and great moments with friends. This roaring place offers entertainment in English so that more of the audience can enjoy the naughty jokes and fun.

Boom Chicago Amsterdam provides theatrical shows, improvisation, stand-up comedy and even risque burlesque shows in the Rozentheater Amsterdam. Aside from their comedic performances, the theatre also plays host to solo stand-up performers on an international level. Enjoy comedians from the US, UK and far beyond.

Don’t miss out on Andrew Moskos brand new comedy show that brings a new style of entertainment called, Bango! Andrew is the director of Bango! and co-owner of Boom Chicago. His show is based on true stories narrated by talented cast members, with interesting, expressive characters. Watch as they respond high-speed with the audience, making the atmosphere comfortable yet fun. ‘Bango!’ also takes suggestions from the audience during the show making the show an interactive and different night each time. Each show will last around two hours, including intermission. If you want to attend a fully improvised comedy show, the ‘shot of Improv’ is highly recommended. This show is performed entirely in English so as to get more audience members involved. Only you decide how crazy this experience gets. And what’s even better is for every good suggestion given, you will receive a free courtesy shot. Are you ready for Boom Chicago?

Even though Boom Chicago presents these shows to english speaking audiences and actors from abroad, this venue also hosts beloved comedians and performers from inside of the Netherlands. Jandino Asporaat is a great of a talented dutch storyteller performing at ‘Bango’. Andrew Moskos said : ‘We are so excited to work with Jandino. His rich stories will be a treat for the cast and the audience! With that many talented people on the stage, working together, it’s going to be a very special night filled with big laughs!’.

Be warned! The bar will be at full capacity approximately an hour before showtime. Even though it’s packed with amazing people, make sure to come early to fully enjoy a drink and a laugh with some friends or new people.

Hold on just a second, did you know that with your Amsterdam Nightlife Ticket you can enjoy a night at Boom Chicago and bring a plus one along with you? In other words, 2 for the price of one!
Enjoy these perks and more with your ticket, and see what else is on offer. 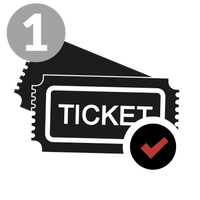 Book your Nightlife Ticket or package here and complete your order.

Once you’ve completed your payment, you can instantly download your ticket(s). 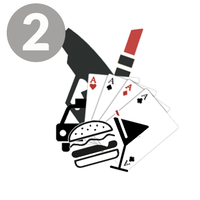 Once you've purchased your Nightlife Ticket, email hello@boomchicago.nl with confirmation. 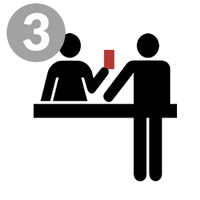 Your ticket will be checked on validity. 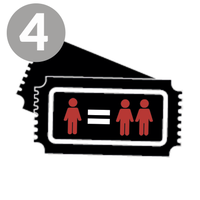 For all inhouse comedy shows.
Unlimited usage within the validity of your ticket(s).